For over forty years, Patrick Regan the Bagpiper has performed, competed and instructed in the ways of the Great Highland Bagpipe. He first set foot on the stage at age three, but it took another eight years to convince the bagpipe to join him. He won his first professional competition at the age of 15 and has continued to entertain audiences and annoy judges to the present day.

A native Texan, Patrick is the first graduate of the Bagpipe degree program at Carnegie Mellon University, the first degree of its kind in the world. Holding a Bachelor of Fine Arts in Music Performance (Bagpipe), he has minors in Conducting and Drama, which becomes apparent during his lively stage performances. He has studied under numerous great piping instructors, including Robert C. Forbes, Seumas MacNeill, Duncan Johnstone, Fred Morrison, Sr., Jimmy McIntosh, MBE, William MacDonald (Benbecula), and Angus MacLellan, as well as at the College of Piping in Glasgow, Scotland. Patrick’s current instructor, Sean Patrick Regan, recently assumed the role of Director of Bagpiping at Edinboro University of Pennsylvania, a position Patrick held for the previous ten years. Patrick holds a Master of Arts degree in Adult Education from Indiana University of Pennsylvania, and a Ph.D. in Music from Durham University in England.

Patrick is a member of the EUSPBA Adjudicator’s Panel, and is certified to judge all aspects of Piping, but his particular affinity is Piobaireachd, the ancient, classical music of the pipes. He especially enjoys judging the entry level Adult Grade IV Senior Piobaireachd, because he remembers that his first teacher, his father, Jimmy Regan, started piping as an adult. To Patrick, the perfect day of judging is to be able to sit under a tree at the far side of the games field and enjoy listening to adult beginners try their hand at the ancient and noble music of Auld Caledonia.
As a performer, Patrick takes the stage, street, or classroom with an exuberance matched only by the instrument he brandishes. Audiences expecting only a few stanzas of “Amazing Grace” are in for a delightful ear-opener. His mastery of British accents (legitimately passed down from his parents) mixed in with an occasional Texas twang, illuminate stories guaranteed to bring a smile to the face of even the most serious Scotsman.In addition to performing locally and abroad, Patrick has taught hundreds of students and dozens of teachers over the years.

And when he grows up, he wants to be a bagpiper. 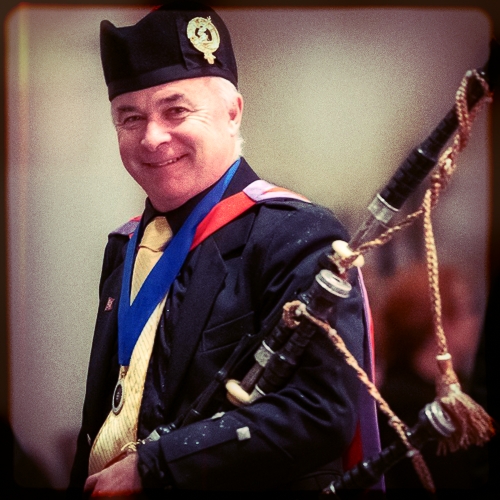